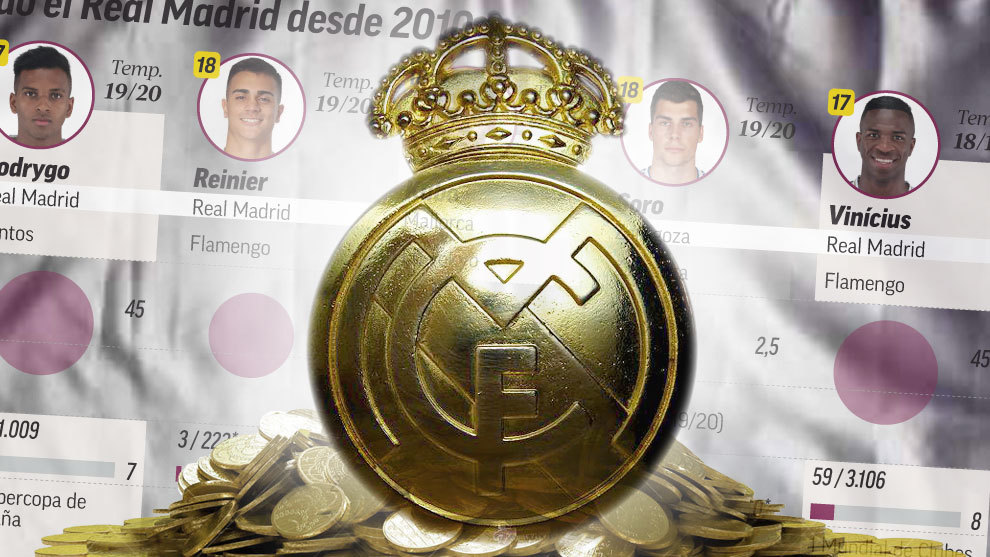 Ten years have passed since Real Madrid completed the signing of a young Sergio Canales for six million euros, sparking a new transfer policy of focusing on young talents.

Last summer, the club signed a new record of six players under the age of 21 for their first team.

Next up could be the 17-year-old Eduardo Camavinga or the 19-year-old Erling Haaland.

It's a strategy which has exploited specific cases to now make up the majority of new arrivals at the Estadio Santiago Bernabeu, influenced by both global and local factors.

On one side the boom in transfer prices ever since Neymar left Barcelona for Paris Saint-Germain, and on the other the figure of talented head scout Juni Calafat.The total investment is 438.8 million euros, but 119.5m euros have been recovered.

Looking at the success of the policy, Real Madrid have been reinforced by the gamble on promising youngsters to grow in the team until they become key players.

It has become more complicated in recent years, when even youngsters can cost more than 40 million euros, but the cases of Raphael Varane (2011), Casemiro, Dani Carvajal or Isco (2013) and Marco Asensio or Fede Valverde (2016) show value in six key players who all cost less than 30 million euros.

The best example of all 24 signings is surely Marco Asensio, who was also wanted by Barcelona and joined as an 18-year-old for just 3.5m euros from Real Mallorca.After a year on loan at Espanyol, he burst onto the scene, much like Fede Valverde, who also needed some time to develop before breaking into the side.Casemiro, Carvajal and Isco were all born in 1992, Varane in 1993 and they had all played at the top level in important leagues before signing for the club.

Isco was the most expensive in the first five years of this policy at 30 million euros, but he was already an established star.All four of those players have been essential to winning four Champions League trophies in five years.

Since May 2017, when Real Madrid signed Vinicius Junior, the club have spent 300m euros, more than 75 percent of the total since 2010, showing the rising prices of youngsters.Until 2017, Real Madrid signed 13 players for 138.5m euros, in the last three years, 11 have cost 300.5m euros, from an average of 10.65m euros per signing before the Brazilian arrived to 30.05m euros each afterwards.

It's still too soon to evaluate those deals, as is the case with Luka Jovic (60m euros), Eder Militao (50m), Rodrygo Goes (45m), Reinier Jesus (30m), Vinicius (45m) and Brahim Diaz (17m).All of these players are signings for the future, rather than the present, while Reinier hasn't even made his debut and will go out on loan next season.

Andriy Lunin (8.5m euros) has not played either but will become the second-choice goalkeeper next season.It's evident that these higher prices bring with them a higher risk.They came... And they left Not every signing has worked out and some of them have already departed, such as Mesut Ozil, who lasted three season and was sold for a profit (29m euros).

Mateo Kovacic was another player who stayed in Madrid for three seasons before leaving for Chelsea for more money than he was bought for, with a profit of 17m euros.One player who didn't work out was Theo Hernandez, who joined from Atletico Madrid, as he lasted one season and was then loaned out to Real Sociedad before being sold for a six million euro loss the next summer.

PromisingSome players are yet to prove their true value, despite looking like talents who could dominate the game for years to come.The best examples are Dani Ceballos and Martin Odegaard, both of whom are full internationals and regular starters whilst out on loan.Ceballos may struggle to feature under Zinedine Zidane, but his talent is unquestionable.

After three loans in four years, Odegaard will become a crucial option for Real Madrid, whether that is in 2020 or 2021.Takefusa Kubo, who joined for free, and Alberto Soro, who cost 2.5 millino euros, are yet to show their full potential.DisappointmentsOn the other hand, there are players who failed to live up to expectations, such as Sergio Diaz, labelled the Paraguayan Sergio Aguero, who joined for five million euros in 2016 and remains out on loan.Lucas Silva was about to celebrate his 22nd birthday when he joined in January 2015, yet he left last summer through the back door, now playing for Gremio.

Jesus Vallejo continues to struggle with injuries and is now on loan at Granada after a failed loan spell at Wolves earlier this season, and a summer exit looks likely. Source: Marca