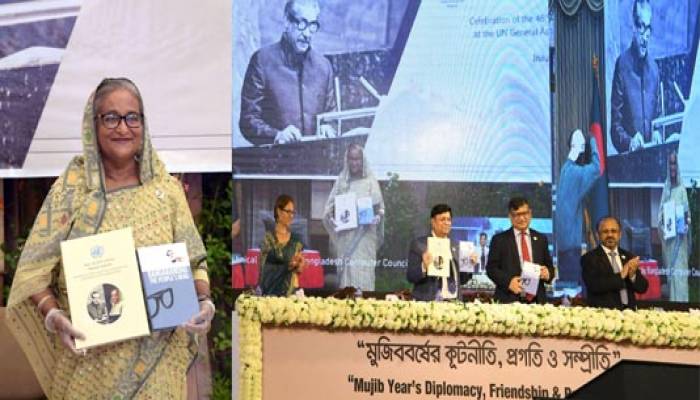 Prime Minister Sheikh Hasina today asked the Bangladeshi diplomats to pursue economic diplomacy alongside political diplomacy to give a boost to the country’s trade and commerce.

“The duty of diplomatic missions has changed in today’s world. Now economic diplomacy has surfaced alongside the political one. We have to pursue diplomacy in such a way that we can boost up the country’s trade and commerce and achieve economic self-dependency by working together with all (of the world),” she said, reports BSS.

She simultaneously stressed the need for working in unison to maintain peace on the globe.

The Prime Minister made the remarks while addressing a commemorative meeting virtually marking the 46th anniversary of delivering maiden speech in the UN in Bangla by Father of the Nation Bangabandhu Sheikh Mujibur Rahman in the United Nations General Assembly (UNGA).

The premier also inaugurated the newly constructed Foreign Service Academy Building and unveiled cover of two books: “Bangabandhu, Sheikh Hasina, and the United Nations: Bangladesh at the World Stage” and “Bangagandhu: The People’s Hero” published by the Foreign Ministry, at the same function.

She attended the meeting from her official Ganabhaban residence while the dean of the diplomatic corps, envoys of different countries and others concerned got connected from the Foreign Service Academy in the premises of Sugandha here through a video conference.

The Foreign Ministry organised the function from the Foreign Service Academy here.

Mentioning that all are dependent on one another in the world, she said, “We expect assistance from all. Likewise, if any country needs help from us, we are ready to do so.”

Turning to the COVID-19 pandemic, the premier said, “I wish the world will get relief from the coronavirus pandemic and the wheels of the economy will again start functioning and thus all can live their normal life. And for that reason the entire world should work together.”