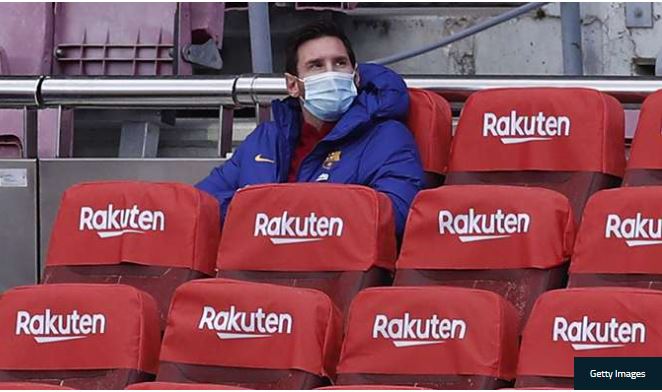 Lionel Messi was named among Barcelona's substitutes for Saturday's La Liga contest against Real Betis, with the Argentine deemed "not fresh" enough to start the fixture.

The absence of the captain from Ronald Koeman's starting XI at Camp Nou was a peculiar one given Barca have failed to win their past four matches in Spain's top flight, with reports in Spain initially suggesting he was not being risked due to a slight ankle problem.

Koeman's assistant Alfred Schreuder has, however, insisted that there is no injury concern and that the 33-year-old simply isn't at peak fitness: "We're not talking about an injury [for Messi], he's just not fresh.

"He has played a lot of games. Koeman has said: if you're not 100 per cent fresh, it's better you start on the bench."

Messi, who last started on the bench for two matches in September 2019, had previously started every game in La Liga and the Champions League under Koeman, who named Antoine Griezmann, Ousmane Dembele and Ansu Fati in his starting line-up.

The Argentine legend has regularly found himself in the spotlight since failing to engineer a move away from Barca in the past transfer window, particularly given he is yet to score from open play or provide an assist in La Liga this term.

On Friday, Koeman defended Messi against claims that he was not working hard enough for the team following viral footage from Barca's midweek win over Dynamo Kiev, which showed him failing to press the opposition in second-half injury time.

In that game, Messi had more shots (six) and created more chances (four) than any other player in the match, but he also lost possession more frequently than anyone else (20 times) without once winning it back.

"I didn't seem him [walking] and I'm not interested in this because I don't see him walking," Koeman said. "If you want to start a controversy around this point, it's your problem.

"Messi is mentally good, enjoying this sport. He's a winner and sometimes you go through moments when the ball doesn't go in, but he looks really focused.

"I think Messi still has so many qualities. He's very important in our game."