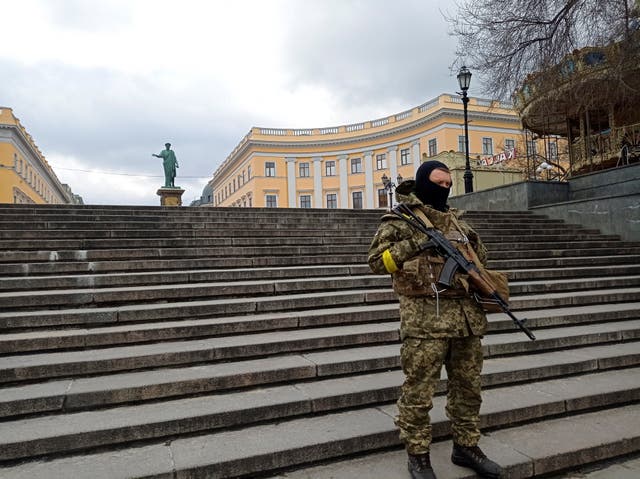 Ukraine claims more than 12,000 Russian soldiers have been killed in combat since Vladimir Putin declared war on the eastern European country on 24 February.

On Tuesday, the 13th day of Russia’s invasion, the Ukrainian military command posted an infographic about Russian losses on Twitter that alleges 12,000 Russian personnel have been killed so far.

On Sunday, Ukraine’s military command had put Russian casualties at “over 11,000”.

There has been no immediate response from the Russian defence ministry to Ukraine’s claims, which have also not been independently verified. The Ukrainian military has not been releasing equivalent data for casualties on its own side.

The Russian defence ministry, in its first and so far only report on its casualties earlier last week, had said 498 Russian troops were killed while 1,597 sustained wounds.

According to the UN, at least 406 civilians, including 27 children, have been killed and 801 others injured in Ukraine since the onset of the invasion, although it maintains the real figures are considerably higher.

The war on Ukraine has forced over two million residents to flee the country, the UN refugee agency’s chief said in a tweet on Tuesday.

Earlier, the agency’s chief Filippo Grandi said this was the fastest exodus of people Europe has seen since the Second World War.

The agency has warned that the war could displace nearly five million people.

Most refugees have been moving to western Europe, towards Poland, Slovakia, Romania, Moldova and Hungary. Poland, which has opened its doors to the lion’s share of Ukrainian refugees, has reportedly taken in over 650,000 people.

Meanwhile, president Volodymyr Zelensky denounced the west for failing to protect his country from Russia after Nato denied his request to impose a no-fly zone over Ukraine.

Meanwhile, president Volodymyr Zelensky denounced the west for failing to protect his country from Russia after Nato denied his request to impose a no-fly zone over Ukraine.

“But the responsibility for that rests also on those who were not able to take a decision in the west for 13 days,” he said in a video address from an undisclosed location.

He called for the expansion of humanitarian corridors for Ukrainian civilians fleeing war, and more support from the Red Cross.

Mr Zelensky has also warned that Russia will not stop with the current invasion and will continue to threaten other European countries.

“When the limits of rights and freedoms are being violated and stepped on, then you have to protect us. Because we will come first, you will come second,” he said.