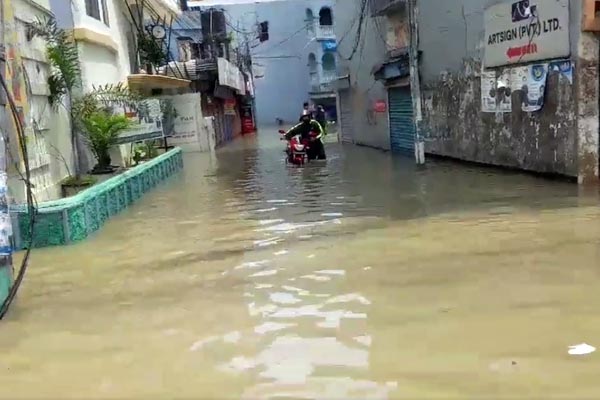 The flood situation in Sylhet has further deteriorated yesterday as the Surma and the Kushiyara rivers started flowing above the danger level.

The heavy torrential rainfall in the north-eastern region and India's Meghalaya and Assam has left parts of the district paralysed since May 12 while the cyclonic storm Asani worsened the situation.

Some 12 to 13 lakh people remained marooned in the region as all major rivers swelled and some exceeded danger level in the last couple of days, said the authorities.

The Surma river in Sylhet city area started overflowing early yesterday and was flowing 29cm above the danger level in the morning.

According to the Flood Forecasting and Warning Centre (FFWC), the Surma was flowing 143cm above the danger level in Kanaighat upazila headquarters point at 9:00am yesterday.

At the same time, the Kushiyara was flowing 138cm above the danger mark at Amolshid point in Zakiganj upazila and above 45cm at Shewla point in Beanibazar upazila.

However, the water of the Sari-Gowain river was reduced by 13cm and flowing 5cm below the danger level at Sarighat point in Jaintiapur upazila.

Hundreds of houses were waterlogged and the road network was almost snapped in the areas.

Debjyoti Das, of Sobhanighat area, said they knew the Surma was swelling but had no idea that their neighbourhood would be submerged overnight.

"We are now shifting to the upper floors considering that the situation may deteriorate further," said.

According to Sylhet City Corporation (SCC), more than 1,000 people took shelter at 15 shelter centres in the city.

SCC Chief Engineer Nur Azizur Rahman said, "We are facing a crucial waterlogging because the rainwater could not reduce because of the overflowing Surma."

"Now we are working to supply food aid to the people who took shelter at different shelter centres," he added.

Sylhet District Relief and Rehabilitation Officer Shofique Uddin Ahmed, however, said that situation was not yet intense enough to be declared a "Distress Zone".

"We estimate a total of 12 to 13 lakh people directly and indirectly affected by the flood. We have prepared 199 shelter homes and allotted 129 tonnes of rice and 1,000 sacks of dry food for the victims," he said.

He further said that the floodwater would reduce gradually but the situation would deteriorate in the north as the Teesta and other rivers were swelling.