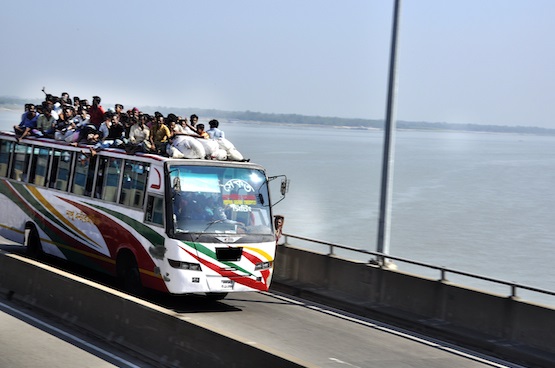 When a fake driving licence holder driving an unfit bus carrying 50 passenger on board, you can imagine how risky the life of the passenger including the driver. Every year around 5000 people die similar numbers of people get injured in road accident in Bangladesh. The amount of people die in road accident is almost similar to the fatalities in a full scale war.

Poor management and transport gangs control the whole transport sector in the country. According to World Bank ‘Bangladesh’s network of 3,900 kilometers of inland waterways are the only mode of transport for 12 percent of country’s rural communities. Carrying about 194 million tons of cargo and roughly 25 percent of all of Bangladesh’s passenger traffic each year, inland waterway transport is less expensive for the poor and essential for trade among the country’s biggest cites and with neighbouring India and Bhutan. Moreover, better inland waterways can help Bangladesh reduce road traffic and associated greenhouse gas emissions.

A report published on the the daily star says ‘In the 1990s, there were around 11,000 buses in Dhaka, while around 70 lakh people lived in the city. Currently, around 1.5 crore people live in the capital, but the number of buses has come down to around 4,000. He also claimed that around 90 percent of public transport, including buses, minibuses, CNG-run auto-rickshaws, and cabs, are unfit. Besides, around 50 percent drivers operate public vehicles with fake licences.

As economy changing Bangladesh people using transport more than ever. With poor funding, poor management and lack of will and attention, Bangladesh does not have enough resources to check vehicle safety and training drivers and recruiting transport police, even the lane mark, speed limit, road lights, hardly visible.

But merely a very slow or no improvement noticeable in Bangladesh road safety.