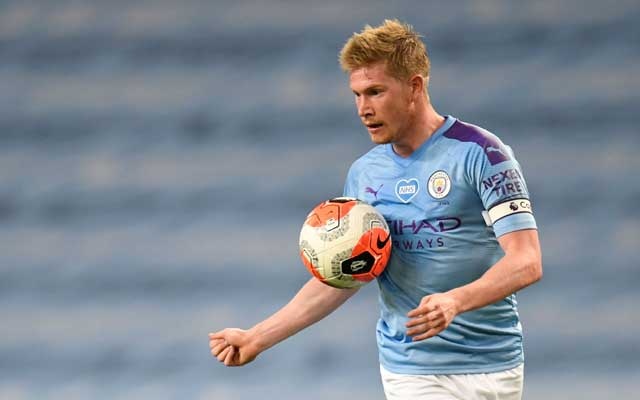 Manchester City star Kevin De Bruyne has won the Premier League Player of the Season award for the 2019-20 campaign, despite Liverpool running away with the title.

The Belgium international playmaker matched the record for assists in a single campaign by providing 20, equalling a mark set by Arsenal legend Thierry Henry in the 2002-03 campaign, while he also scored 13 goals.

Furthermore, he created the most chances and had the most goal involvements of any player in the division.

The fans recognised his achievement by nominating him as the league’s outstanding player in a public vote, in which he saw off competition from Liverpool trio Trent Alexander-Arnold, Jordan Henderson and Sadio Mane, plus Southampton striker Danny Ings, Burnley goalkeeper Nick Pope and Leicester forward Jamie Vardy.

The 29-year-old started the season in strong fashion, with eight assists and two goals in the opening seven rounds of fixtures, where he was involved in at least one goal in each with the exception of a shock 3-2 loss to Norwich – a match he played only 33 minutes of after he was named as a substitute.

While he enjoyed his richest vain of form at the start of the season and over the festive period, when he scored three and created three more in a blistering four-game burst, he was a consistent provider of excellence for Pep Guardiola’s side throughout the campaign, finishing on a high as he scored two and laid on another in a 5-0 win over the Canaries.

City, however, finished a distant second in the league behind champions Liverpool, who romped to the crown by an 18-point margin.

The last league-winning player to win the gong was N'Golo Kante of Chelsea in 2016-17.

The news of the award will come as little consolation to the 29-year-old, who was a member of the City squad that surprisingly crashed out of the Champions League to Lyon at the quarter-final stage following a 3-1 defeat. De Bruyne netted in that game but his contribution was not significant enough to stop Guardiola’s side being on the wrong end of a monumental upset.

In all competitions during the 2019-20 season, De Bruyne featured 48 times for Guardiola’s men, scoring 16 times and laying on another 23.

He has been with City for five campaigns and now has 57 goals and 89 assists in 222 appearances for the club.