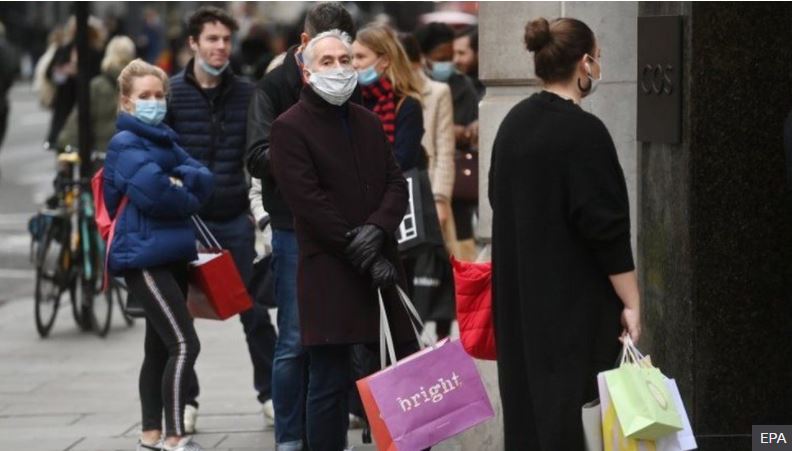 London will move into England’s highest tier of Covid restrictions from 00:01 GMT on Wednesday, Health Secretary Matt Hancock has said.

Parts of Essex and Hertfordshire will also enter tier three at the same time.

A new variant of coronavirus has been identified "which may be associated with the faster spread in the south of England", Mr Hancock told the Commons.

He said action had to be taken immediately to slow "sharp, exponential rises" in infection.

Tier three restrictions mean that pubs and restaurants must close except for takeaway and delivery services.

With Kent, Medway and Slough already under tier three rules, it means large parts of south-east England will soon join much of the Midlands, North West and North East England under the strictest curbs on social contacts.

More than 34 million people will be in tier three when the changes come into effect, 21.5 million in tier two and about 700,000 in tier one.

The latest tier three areas include:

Mr Hancock said surging cases meant he was unable to wait until the next scheduled review of England's three-tier system on Wednesday.

He said there was "currently nothing to suggest" that the new variant was more likely to cause serious disease and advice was that it's "highly unlikely" the mutation would fail to respond to a vaccine.

But he added: "It shows we've got to be vigilant and follow the rules and everyone needs to take personal responsibility not to spread this virus."

Labour's shadow health secretary Jonathan Ashworth said "none of us are surprised" at the action the health secretary is taking, but warned the country was "heading into the Christmas easing with diminishing headroom".

Meanwhile, London Mayor Sadiq Khan described the announcement as "incredibly disappointing" for businesses, but said it was clear the virus was "accelerating in the wrong direction" as he urged all Londoners to follow the rules.

Essex County Council leader David Finch said he was "very disappointed" with the news, adding: "We will lobby the government to ensure our Essex businesses have all the support they need, during this very challenging time."

And Hertfordshire County Council's leader, David Williams, acknowledged the changes would prompt concerns with "both residents and businesses" but said: "The message remains clear - we must all stay disciplined and stick to the guidance and rules if we are to improve the situation in Hertfordshire."

The director of the Theatres Trust said the London's theatres would face "disaster" under the stricter rules, while business owners in the capital said it would "be a ghost town".

One MP said they were told in an earlier briefing from Mr Hancock that cases were doubling every seven days in the capital and that the next review of the tier system would be on 23 December.

Conservative MP Stephen Hammond, one of the London MPs who spoke with Mr Hancock earlier, said some of the figures they had been shown today "justified" the decision to move London into the most severe tier.

Mr Hammond denied that London had been treated as a special case by not being put in tier three earlier - saying last time around only small areas of London had seen big rises in cases.

Some areas in and around London have recorded large increases in confirmed coronavirus cases over the past week.

In the week to 12 November, Havering was the only area of London in the top 100 places in England with the highest infection rates, at 85th.

Now the two regions seem to have swapped places, with Yorkshire enjoying the third lowest rate of about 170 per 100,000.

Despite coronavirus cases continuing to rise, No 10 said the government "has no plans to review the Christmas guidelines" which effectively suspend the tier system of restrictions and allow more households to mix.

It came as people in Scotland were told to "cut down" the number of contacts in the week before Christmas if they plan to meet up with relatives.

In Wales, a second health board has suspended non-urgent care amid a continued rise in cases. And a leading doctor in Northern Ireland said its health service is facing a "nightmare" scenario in January.

Elsewhere, Covid vaccinations have started being given to patients at GP surgeries in England as part of the next stage of the rollout of the vaccine programme.

Overall on Sunday, confirmed cases rose by 19% across the UK compared with the previous seven days, with 18,447 reported. A further 144 deaths were also recorded.