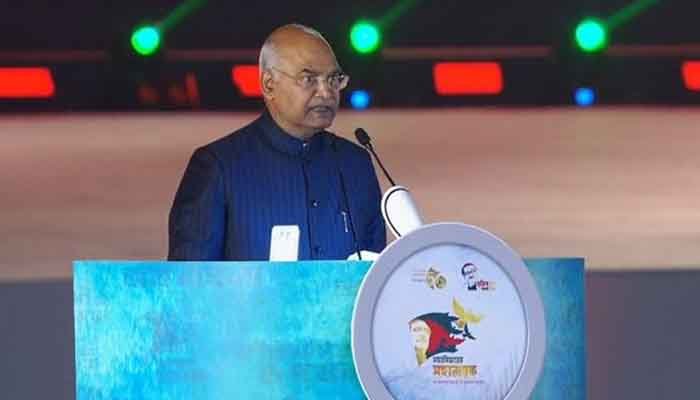 Visiting Indian president Ram Nath Kovind on Thursday said the anti-liberation forces who brutally killed Father of the Nation Bangabandhu Sheikh Mujibur Rahman and most of his family did not realize that bullets and violence cannot extinguish an idea that has captured the imagination of the millions of people.

Above all, he said, the anti-liberation forces did not count on the determination and resilience of prime minister Sheikh Hasina, who faced assassination attempts and dictatorships with remarkable courage.

The Indian president said prime minister Hasina has been driven by the strong conviction to realise the dream of Bangabandhu, and his spirit of the “rebel”, as set out in the famous poem by the great poet Kazi Nazrul Islam.

He made the remarks at the Victory Day and Mujib Borsho celebrations in the city. President Abdul Hamid spoke as the chief guest.

The Indian president said today, these ideals of Bangabandhu are being realised by the hardworking and enterprising people of Bangladesh, guided by the leadership of prime minister Sheikh Hasina.

“The vision of Bangabandhu was of a Bangladesh that was not only free politically, but also of a nation that was equitable and inclusive. Sadly, his vision could not be realised in his lifetime,” he said.

On this occasion, president Kovind paid tributes to the memory of the untold suffering of tens of millions of people of Bangladesh, especially the brutalized daughters, sisters and mothers. “It is their sacrifice, and the righteousness of the cause of Bangladesh, that has transformed the region.”

“As our nations develop and our friendship further deepens, let us continue to work together towards realizing the dreams of our peoples,” president Kovind said.

President Kovind said history will always bear witness to this “unique foundation” of friendship between the two countries, forged in the people’s war that liberated Bangladesh.

“Veterans of that war – both from India and Bangladesh – some of whom are here in this audience, including the president of Bangladesh – are living testimony to the power of faith and friendship, which can move mountains,” he said.

Terming the invitation for him to visit and participate in this celebration of 50 years of Bangladesh a unique honour, president Kovind said it is also a true reflection of their very special friendship.

“Like prime minister Narendra Modi, I’m delighted that my first visit outside India since the outbreak of the COVID pandemic is to your country Bangladesh. I am also honoured to participate in the Mujib Borsho celebrations,” he said.

A little over 50 years ago, the vision of an independent Bangladesh inspired millions but it seemed a remote and impossible dream then to naysayers, skeptics and detractors, the Indian president observed.

“But the inspiring statesmanship of Bangabandhu; his clear-sighted moral conviction and his unflinching determination to seek justice for the people of East Pakistan were truly the game-changers,” he said, adding that world learnt a valuable lesson that the will of the majority of people cannot be subjugated by any force, however brutal.

President Kovind remembered that he was inspired, as a youth, by the moral courage of Bangabandhu. “Like millions of others, I was electrified by his powerful voice, and the understanding that it carried the aspirations of 70 million people of Bangladesh at that time.”

Like millions of Indians of his generation, he said, they were elated by the victory of Bangladesh over an oppressive regime and were deeply inspired by the faith and courage of the people of Bangladesh.

“We’ve witnessed the commendable economic growth achieved by Bangladesh in the last decade, which has also created opportunities for its citizens to realize their full potential,” said the Indian president.

“Your country’s stellar economic performance complemented by geographical advantage can benefit the entire sub-region and the world,” he said, adding that there is a growing recognition among international experts about the fact that close sub-regional trade, economic cooperation and connectivity will help accelerate the process of achieving a “Sonar Bangla” in the shortest possible period of time.

President Kovind said India has always attached the highest priority to its friendship with Bangladesh and they remain committed to doing all they can, to help realize the full potential of our friendship.

“In recent years, we have seen steady expansion of trade, economic cooperation, people-to-people ties, student exchanges and extensive engagements across multiple areas of activity. These are guarantees of a sustainable, deep friendship, based on mutual respect, sovereign equality and our respective long-term interests. I am glad that our recent efforts have been inspired by this vision,” said the Indian president.

If the first 50 years of the partnership began by surmounting extraordinary challenges that forged a deep friendship between our people, perhaps, he said, the time has come to raise the bar even higher.

“To achieve that, our businesses, our academics and especially our youth must be motivated to jointly create globally-pioneering initiatives in the world of ideas, creativity, commerce and technology,” said the Indian president.

He said their innovators should be urged to find new solutions, based on locally-appropriate technologies, to address their common development challenges.

“We must urge our thinkers to leverage the power of our own unique success stories, to find ‘best-in-class’ ideas that are relevant in our regional context. Together we can create opportunities for seamless flow of ideas and innovation as we enter a new era of inter-connectivity,” said the Indian president.